Law News You Can Believe In 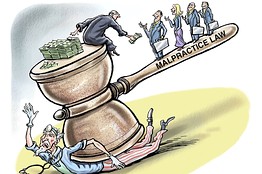 Two recent cases in the news have stirred new conversations about the need to adequately define and identify instances of paraprofessional neglect in malpractice suits. In one instance in Rhode Island, a Certified Nursing Assistant removed jewelry from a nursing home resident with Alzheimer’s and pawned the items. In another case, a Registered Nurse and two Certified Nursing Assistants were charged with malpractice as a result of the death of a nursing home resident attributed to pressure sores that were a result of being left in urine and feces for several hours. While these may seem like your standard cut and dry malpractice suits they are not. With the changes going on in the healthcare industry that are redefining the professional and paraprofessional roles, you have to know clearly what your state definitions are before proceeding.

The changing role of the paraprofessional

A case in point

The best way to understand how the chain of accountability works is to take the following case overview as an example. Mrs. Jones is a resident with dementia in a long term care facility. She needs assistance with continence and is not mobile. One day, Mrs. Jones urinates in the bed. She is left on the urine soaked sheets for six hours until shift change. The CNA on the day shift did not check on her. The CNA on the night shift did and documented the incontinence and changed the linens. As a result of being left on the urine soaked bed clothes for 6 hours, Mrs. Jones developed pressure sores that became infected and are listed as a contributing cause in her death 4 months later. The family brought a suit of malpractice against the agency, the charge RN for the day shift and the CNA on the day shift. In court, the RN was found guilty of malpractice, but the charges were reduced to professional neglect for the CNA. This is despite the reality of the fact that the RN is not the one who is to check on the residents every 2 hours, the CNA is. The ruling was based on the understanding that the CNA is a paraprofessional and therefore unregulated. The RN is a regulated professional who is responsible for the CNA. The RN is guilty of malpractice and the CNA is not.

Where things get even murkier

As more people begin to age in place there will also be a corresponding rise in negligence and malpractice claims against paraprofessionals. Knowing what is their scope of practice and chain of command within your state is going to be essential to mounting an appropriate defense.